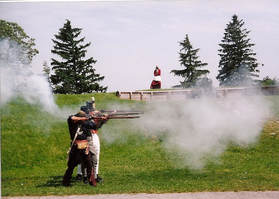 The Buffalo NewsSeptember 10, 2006
The Prettiest Sunday Afternoon Drive in the World
By Christine A. Smyczynski

When Winston Churchill visited Canada in 1943 he dubbed the Niagara Parkway the “Prettiest Sunday afternoon drive in the world.” This 35-mile two-lane scenic route follows the Canadian shores of the Niagara River from Fort Erie to Niagara-on-the-Lake. And, as Mr. Churchill exclaimed, it is a very pretty route, perfect for a leisurely Sunday afternoon drive. My husband and I, along with our two youngest children, recently spent a Sunday afternoon meandering along the parkway.This two-part article will highlight the scenery and attractions that can be found along the route. Part one will follow the parkway from Fort Erie to Niagara Falls, while part two takes you from just north of Niagara Falls to Niagara-on-the-Lake. Driving the route one-way can take you as little as an hour, if you just drive and don’t stop to get out of the car, to several days if you stop often to fully enjoy all the attractions along the way. Of course, those of us who live in the Buffalo area can revisit the route on numerous occasions, since it is so close.
A brief overview
In 1908, the Niagara Parks Commission (NPC), an agency of the Canadian government which has preserved and maintained parkland around the Falls since 1885, began expanding its property and the idea of a scenic parkway along the river was born.
The parkway was constructed in sections; by 1912 the section from Queen Victoria Park, right across from the falls, to Fort Erie was completed. In the mid-1920’s the parkway was extended to Queenston, a few miles north of Niagara Falls. By the 1930’s the entire parkway was complete.
Running parallel to the parkway is the Niagara River Recreational Trail, a multi-use trail system for walking, hiking, biking and in-line skating. This mainly asphalt surfaced trail was developed by the NPC between 1986-1994. Plaques located along the trail point out information about local history.


Beginning the journey
To get the full impact of the scenic beauty of the parkway, it’s best to start at one end of the parkway and drive the entire length. We started out trip by crossing over the Peace Bridge. Allow extra time to go through customs and be sure to bring photo ID and proof of citizenship, such as a passport, driver’s license and birth certificate.


​After paying the toll, turn right at the very first exit and follow the signs towards the Historic Fort and the Niagara Parkway. Once you reach the parkway, turn right and head toward Old Fort Erie, about a mile or so down the road to your left. You can stop at the fort if you wish or just make a u-turn and continue north on the parkway.


Historic Fort Erie was originally built in 1812, as the British garrison during the war. It was reconstructed in the 1930’s. Costumed interpreters take you through the various structures decorated in period style.

As you continue north on the parkway from the fort, there are two small parking areas, where you can pull over to take a look at the skyline of Buffalo. Just before you reach the Peace Bridge, you will see Mather Arch, a large stone archway just to the left of the parkway. Built in 1940 as a gateway for people arriving into Canada, it was named after inventor, Alonzo Mather, who donated the land on which the arch was constructed.


After driving under the Peace Bridge, you will pass several Asian restaurants. One of the best known, Ming Teh, recently re-opened under new management and has received favorable reviews. It wasn’t time to eat, so we didn’t stop, but we’ll check it out another time.
You’ll notice as you drive that there are spots to pull off the road every mile or so; feel free to stop whenever the scenery inspires you. The day we took our drive, there were a lot of people picnicking, fishing and sunbathing along the parkway.


Just past the International Railway Bridge, you’ll see the Bridgeburg Station fishing area to your right. To the left is the Mahoney Doll’s House Gallery-Bertie Hall. The Mildred Mahoney dollhouse collection is the largest of its type in the world, with over 140 dollhouses, some dating back to 1780. Bertie Hall, the name of the structure that houses the collection, is a Canadian National Historic Site that was important stop on the Underground Railway. (This has since closed)

About five miles north of the Peace Bridge is the Niagara Parks Commission Marina, the only public marina on the Canadian side of the river. They have public restrooms, a snack bar and picnic tables, along with a very nice view of Grand Island.
After crossing Black Creek, which is popular with canoeists and kayakers, you will enter the city limits of Niagara Falls. Some of the attractions along this stretch of road include the Willoughby Museum, located in a 1916 one-room school house. The museum has artifacts and historical information about the villages of Willoughby and Chippawa.
You will also pass the Legends of the Niagara Golf Complex, owned and operated by the NPC. They have two championship 18-hole golf courses, plus a nine-hole putting course. Right next to the Legends course is Chippawa Battlefield Park, a 300-acre site owned and operated by the NPC, which is the last remaining battlefield site from the War of 1812. The Battle of Chippawa was found on July 5, 1814.


The parkway takes a couple turns through the village of Chippawa, which has several small restaurants. We stopped to take a break at Kings Bridge Park, which has a nice playground. They also have picnic areas and a splash pad. A parking fee is charged Fri.-Sun. during the summer months.


As your approach the falls tourist area, traffic will increase and it will be a challenge to find parking. If you plan to stop, expect to pay up to $18 CDN in the lots closest to the falls, however, you may find less expensive parking off side streets in the city, several blocks from the falls. I can remember, not that long ago, when you could park along the parkway for free. Unfortunately, those days are gone forever!
One place you may consider parking is the lot on Upper Rapids Drive, operated by the NPC, where you can park for $7.50 and take their “people mover’ bus for free to Table Rock right by the falls. For an additional $7.50, you can ride the people mover bus system all day throughout the falls tourist area.
Attractions right along the parkway include the 10-acre Dufferin Island Nature Area, just south of the falls, which has walking trails that wind over eleven small islands connected by bridges. Nearby, the 11,000 square foot Niagara Parks Greenhouse is celebrating it’s 60th anniversary this year.


Queen Victoria Park, considered the heart of the NPC, is located right across from the American Falls. Created in 1887, the 154-acre park has a variety of gardens with native and international plants, as well as a restaurant overlooking the falls. Concerts take place in the park every Friday, Sunday and holiday at 8 pm during the summer, followed by fireworks over the falls.


Western New York An Explorer’s Guide from Niagara Falls and Southern Ontario to the Western Edge of the Finger Lakes by Christine A. Smyczynski (The Countryman Press, 2005).


Niagara Falls: a Guide for Tourists by Dirk Vander Welt (Parkscape Press, 2005)
Directions
The Niagara Parkway runs along the Niagara River from Fort Erie to Niagara-on-the Lake. From the United States it is accessible by any of the four area border crossings; The Peace Bridge, Rainbow Bridge, Whirlpool Bridge (a NEXUS pass only crossing) and the Lewiston-Queenston Bridge.